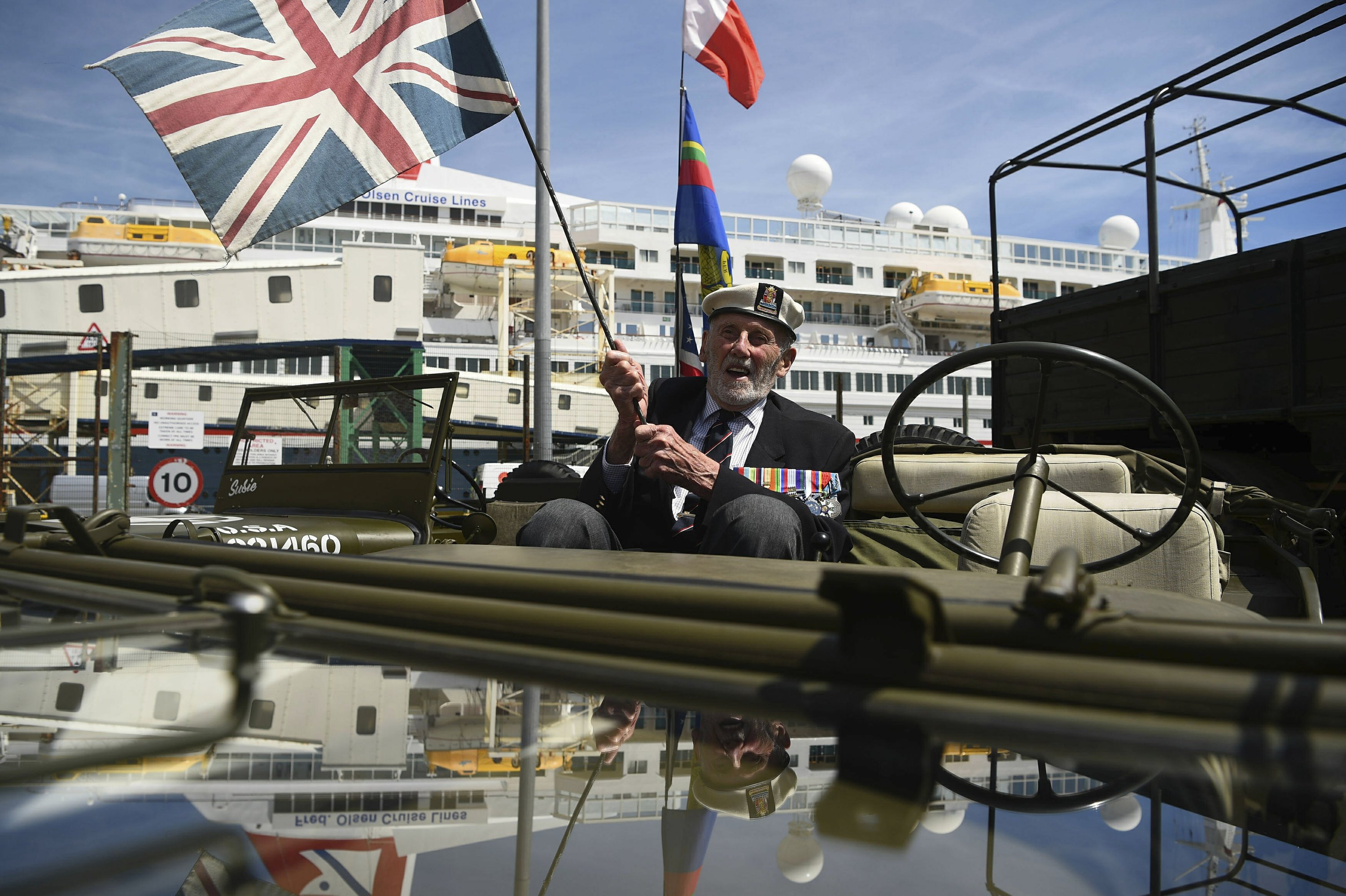 DOVER, England — It took but a few moments for retired Rear Adm. John Roberts to get back into the swing of military life as he arrived Sunday at the English Channel port of Dover to board a ship bound for Normandy and events marking the 75th anniversary of D-Day.

His white beret in place, medals glittering on his chest, he stepped from a bus to find an honor guard and immediately began inspecting the Sea Cadets, one by one. Then the 95-year-old gingerly climbed into a jeep — slowly because his knees are a problem — and cheerfully waved a British flag as photographers jostled to capture the moment. The thought of getting on the boat, though, made him pause.

Roberts and about 300 other veterans of the Normandy invasion left Dover on Sunday for a six-day trip that will take them back to the landing beaches on the 75th anniversary of D-Day.

The cruise will take the veterans to Dunkirk and Poole before arriving in Portsmouth, where Prime Minister Theresa May and U.S. President Donald Trump will join other world leaders for a commemoration of D-Day on June 5. They will leave Portsmouth Harbor that evening and arrive in Normandy the next morning, retracing the crossing they made in 1944.

On D-Day, Roberts was a 20-year-old junior officer aboard a Royal Navy destroyer that bombarded the German defenses. While three U.S. and three British destroyers were sunk that day, Roberts downplayed the danger.

“I was in a ringside seat, as it were, watching the coast being bombarded by bombers, battleships; everything was firing at the shore,” he said. “But the fact is that it was a success, and we knew that really almost by the end of that day. We caught the Germans by surprise.”

The events of June 6, 1944, when more than 10,000 Allied servicemen were killed or wounded, still mark the lives of the men who fought that day. The emotions are even more pronounced this year, as the dwindling cadre of aging D-Day veterans prepare to honor their lost comrades in what may be the last major commemoration that involves significant numbers of the soldiers, sailors and airmen who took part in the invasion.

But here in Dover, as the veterans prepared to set sail, there were bands and veterans from later conflicts to see them off. The Swing-Time Sweethearts — a pair of singers who specialize in period standards such as “The White Cliffs of Dover” and “We’ll Meet Again” — set the mood.

“The younger generations don’t realize enough what sacrifices those men and women made for our freedom. The world would have been a much different place if that war was won by Germany,” said Annie Riley, a singer dressed in a World War II-era uniform of the Women’s Auxiliary Air Force, or WAAFs. “I do sometimes feel they don’t get the recognition they deserve, and then you come to something like this and it is just so humbling to just see how loved they are and how respected they are.”

The veterans and the families crowded onto the decks. A few pulled a few pints. The mood is festive.

This time, everyone is looking forward to landing in France.