Pompeo says US ready to talk to Iran with ‘no preconditions’ 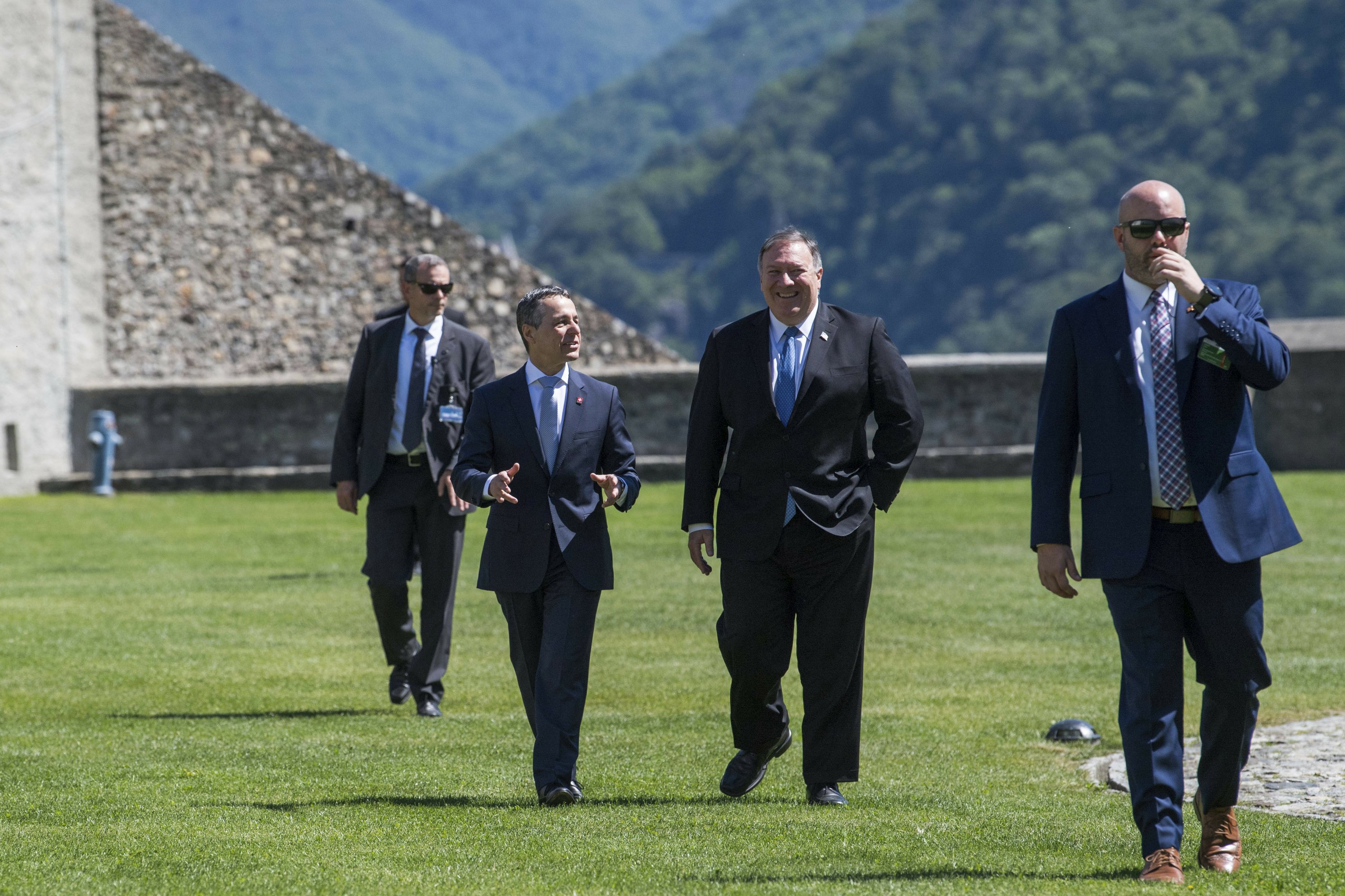 BELLINZONA, Switzerland — U.S. Secretary of State Mike Pompeo said Sunday that the Trump administration is ready for unconditional discussions with Iran in an effort to ease rising tensions that have sparked fears of conflict. But the United States will not relent in trying to pressure the Islamic Republic to change its behavior in the Middle East, America’s top diplomat said.

Pompeo repeated long-standing U.S. accusations that Iran is bent on destabilizing the region, but he also held out the possibility of talks as President Donald Trump has suggested.

“We’re prepared to engage in a conversation with no preconditions,” Pompeo told reporters at a news conference with his Swiss counterpart. “We’re ready to sit down with them, but the American effort to fundamentally reverse the malign activity of this Islamic Republic, this revolutionary force, is going to continue.”

Pompeo’s meeting with Foreign Minister Ignazio Cassis in the southern Swiss town of Bellinzona came amid concerns about the potential for escalation and miscalculation with Iran — a situation that has many in Europe and the Middle East on edge.

Cassis, whose country represents U.S. interests in Iran and has been an intermediary between the two before, made no secret of that nervousness.

“The situation is very tense and we are fully aware these tensions. Switzerland, of course, wishes there to be no escalation no escalation to violence with Iran,” he said. “Both parties are now increasing the pressure and this is a worry for us.”

Cassis said Switzerland would be pleased to serve as an intermediary, but not a “mediator,” between the United States and Iran. To do so, however, would require requests from both sides, he said.

Neither he nor Pompeo would say if such requests had been made of the Swiss.

Pompeo thanked Switzerland, which serves as the “protecting power” for the United States in Iran, for looking after Americans detained there. Trump administration officials have suggested they would look positively at any move to release at least five American citizens and at least two permanent U.S. residents currently imprisoned in Iran.

Pompeo declined to comment on whether he had made a specific request to the Swiss about the detainees. But he said the release of unjustly jailed Americans in Iran and elsewhere is a U.S. priority.

Pompeo was in Switzerland on the second leg after Germany of a four-nation European tour in which he is seeking to assure leaders that the U.S. does not want war with Iran. He is also stressing that the U.S. will defend itself and not relent in raising pressure on Iran with economic sanctions.

Despite that stance, Trump has signaled a willingness to talk with Iran’s leadership. Iranian officials have hinted at the possibility but also insisted they will not be bulled.

“If they want to talk, I’m available,” Trump said last week, even as Pompeo and the White House national security adviser, John Bolton, were stepping up warnings that any attack on American interests by Iran or its proxies would draw a rapid and significant U.S. response.

The U.S. is sending hundreds of additional troops to the region after blaming Iran and Iranian proxies for recent sabotage to tankers in the Persian Gulf and drone attacks on Saudi Arabia’s oil infrastructure.