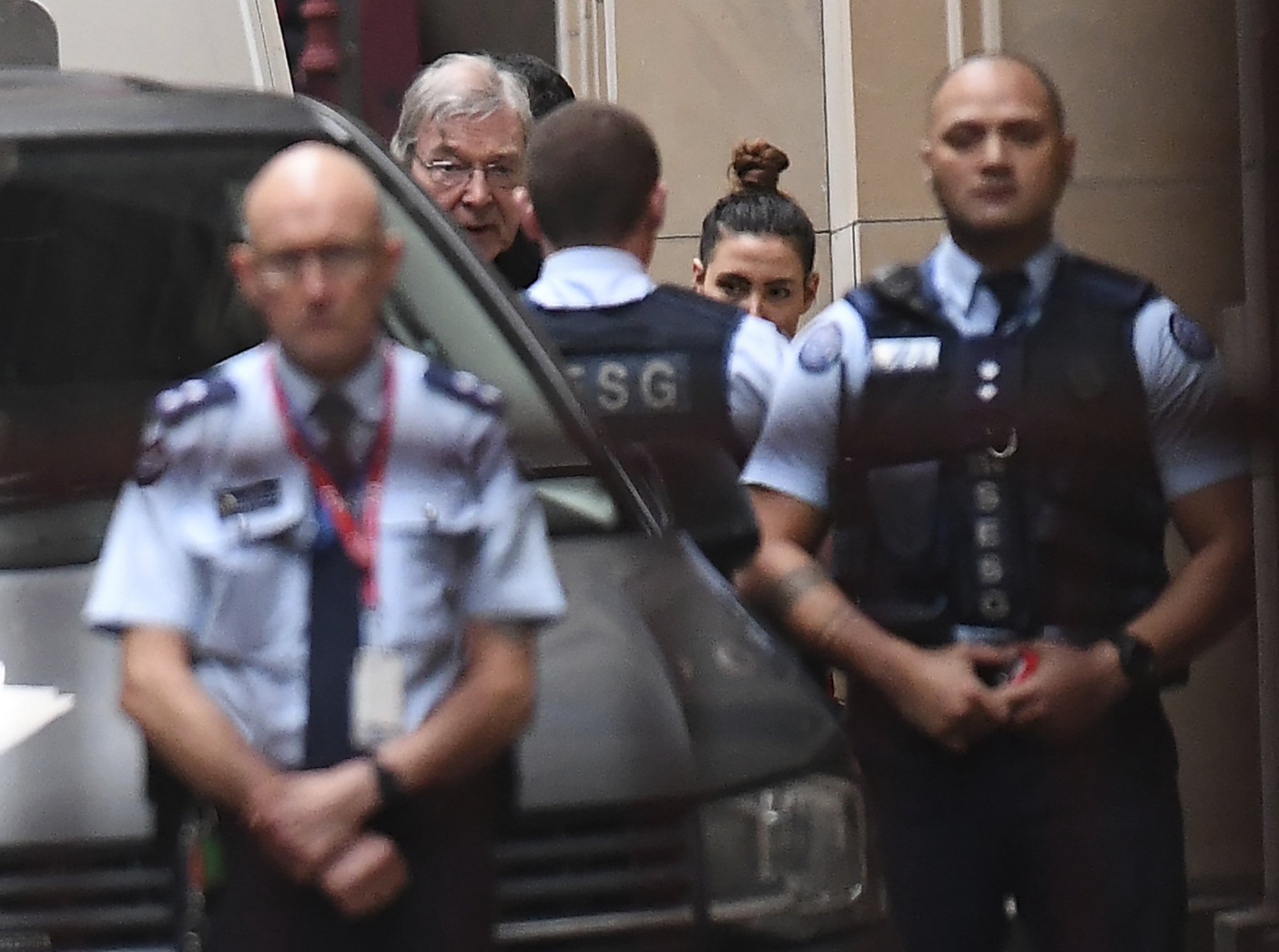 MELBOURNE, Australia — The most senior Roman Catholic found guilty of child sex abuse began his court appeal Wednesday against his convictions on charges of molesting two choirboys in an Australian cathedral more than 20 years ago.

Cardinal George Pell, 77, appeared in the Victoria state Court of Appeal wearing a cleric’s collar for the hearing being heard by three judges on Wednesday and Thursday. While Pell remains Australia’s highest-ranking Catholic, the Vatican has launched its own investigation into his convictions.

Pope Francis’ former finance minister was sentenced in March to six years in prison. He is held in special protective custody because pedophiles are regarded as being at higher risk of harm from other prisoners.

Pell was convicted by a unanimous jury in December of orally raping a 13-year-old choirboy and indecently dealing with the boy and the boy’s 13-year-old friend in Melbourne’s St. Patrick’s Cathedral in the late 1990s. Pell had become archbishop of Melbourne, Australia’s second-largest city, only months before.

Court orders for months had prevented publication of the details of that trial and an earlier trial on similar charges that had ended in September with a deadlocked jury.

Pell’s lawyer Bret Walker told the three judges the main ground for appeal was that the jury could not have found Pell guilty beyond reasonable doubt on the evidence.

In written submissions, Pell’s lawyers argue that more than 20 prosecution witnesses who had an official role in the Sunday Mass in 1996, after which the then-Archbishop Pell molested the boys in a rear room over five or six minutes, gave evidence that the offences did not or could not have occurred.

“This evidence constituted a catalogue of at least 13 solid obstacles in the path of a conviction,” the submissions said.

“No matter what view was taken of the complainant as a witness, it was simply not open to a jury to accept his words beyond reasonable doubt,” they added.

Professor Jeremy Gans, who heads Melbourne Law School and is an expert on Victoria criminal law, said Pell had a strong chance of winning the appeal on the ground that the verdicts were “unreasonable.”

One of Pell’s victims died of a heroin overdose in 2014 at the age of 31, apparently without making any accusation of abuse. State law prevents victims of sexual assault from being publicly identified.

If the appeal judges rule that the verdict is unsafe on the evidence, Pell would by acquitted and would not have to be retried. But Gans suspects the case could end up in the High Court, Australia’s final appeals court.

“I think he’s likely to win on the unsafe verdict ground,” Gans said Tuesday. “I’m sure whoever loses in the Court of Appeal is going to try to appeal in the High Court. Once it gets to the High Court, things get really unpredictable. They’re the least predictable court in Australia.”

Pell’s lawyers have also said they will argue that the trial judge erred in not allowing them to use a video graphic in their closing address. They said the graphic would demonstrate that the crimes that were alleged would have been impossible.

A third ground details an alleged “fundamental irregularity” in the trial in that Pell was not arraigned — asked if he pleaded guilty or not guilty — in front of the chosen jury.

A victory on either of those grounds could result in Pell being retried. But he would likely be freed on bail until his third trial.

The Court of Appeal hears more challenges to the severity of sentences than applications like Pell’s to have convictions overturned.

The Sentencing Advisory Council, a state government-funded advisory body, found last year that of the 230 appeals heard against Victoria court decisions in the 2013-14 fiscal year, only 49 were lodged by defendants solely against verdicts. The research did not show how many of those appeals against convictions succeeded.

In appeals against the severity of sentences, 29% of defendants succeeded, while 70% of prosecution appeals convinced the Court of Appeal to deliver tougher sentences.