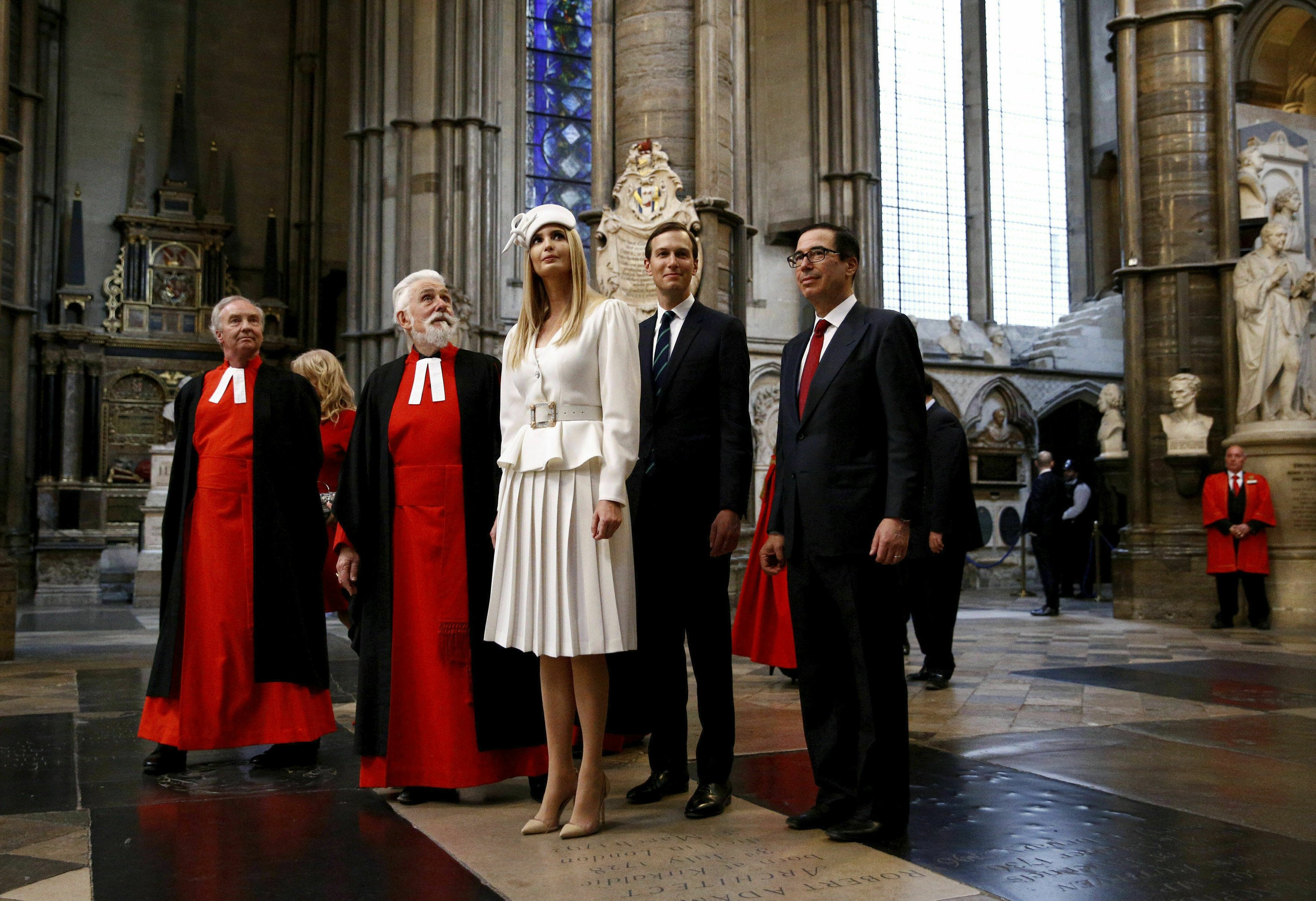 LONDON — It wasn’t just President Donald Trump and wife Melania soaking up the royal treatment during their state visit to the United Kingdom. The president’s four adult children inserted themselves into the pomp at every turn — and helpfully documented the moments on social media.

Whether or not they hold White House posts, Trump’s children, perhaps with an eye toward evoking the princes and princesses who call London home, were frequently by their father’s side as he was feted in Britain.

Donald Trump Jr. posted on Instagram a photo of himself in white tie before Monday’s state dinner. His brother, Eric Trump, was part of the family’s Tuesday tour of the underground Churchill War Rooms and lingered over the chair from which the prime minister oversaw World War II. And Ivanka Trump, who doubles as a senior White House official, spent the day before her father’s arrival touring some of London’s art museums and then took her place by his side for a trade meeting Tuesday with Prime Minister Theresa May.

“Magical night at Buckingham Palace with my best friend!” she wrote, posting a photo on Instagram of herself alongside husband Jared Kushner, another senior White House aide.

Tiffany Trump, a Georgetown University law school student who is less frequently spotted with her father, also attended the dinner.

And all four claimed front-row seats at Trump’s news conference Tuesday with May. Only 13-year-old Barron Trump, who lives at the White House with his parents, skipped the trip.

The presence of the sons and daughters raised some eyebrows. While Kushner and Ivanka Trump work in the White House, Eric and Donald Trump Jr. lead their father’s empire, the Trump Organization, and are meant to keep a firewall between the government and the company. That line is often blurred, as the president regularly mixes government work with business promotion, and will do so again in Europe.

The president declared his intent to stay at his golf course in Ireland while visiting that country on Wednesday. That decision set off a brief kerfuffle with the Irish government, which wanted the meeting between Prime Minister Leo Varadkar and Trump to take place somewhere more formal. A compromise was struck and the two leaders will meet in the VIP lounge of Shannon airport.

The Trump children made their intention to accompany their father known about a month ago, according to two people familiar with their plans but not authorized to speak publicly about private conversations. White House officials adjusted plans to include them, though an early idea to have them fly to London aboard Air Force One was dropped.

The White House did not comment on why the non-administration members were included in the events.

Doug Wead, who wrote a book about the children of U.S. presidents, said it was not inappropriate for a president’s children to accompany their father to experience major moments with him, such as the state visit and Monday’s banquet with the British royal family at Buckingham Palace.

“It’s nothing new,” said Wead, who worked for Republican President George H.W. Bush. Most Americans are used to having presidents with underage children, he said, “so we haven’t seen what happens with older children.” Recent presidents regularly took their younger children with them on foreign trips.

The Trump children have joined the president at high-profile moments before, including his State of the Union addresses.

Jared Kushner and Ivanka Trump both wield considerable clout within the West Wing, their power only growing once their ally, Mick Mulvaney, was installed as acting chief of staff. Both Eric and Donald Trump Jr. are popular among conservatives and were active surrogates during the 2016 campaign. And both are expected to play large roles again next year while Eric’s wife, Lara Trump, who was also in London, is a senior adviser to the president’s re-election campaign.

Meanwhile, the actual young royals, including Princes Harry and William, attended Monday’s state dinner but have largely stayed out of sight during Trump’s visit.

Prince Harry set off British tabloid speculation that he avoided spending additional time with Trump. His American-born wife, Meghan Markle, who gave birth to their son, Archie, last month, did not participate.

Just before he arrived in England, Trump told a British tabloid that Markle “was nasty” after he learned she had criticized him in 2016. In an interview to air Wednesday on ITV’s “Good Morning Britain,” Trump told Piers Morgan that he meant no royal insult, only that Markle was being “nasty about” him.