The Latest: Macron thanks US D-Day veterans for sacrifice 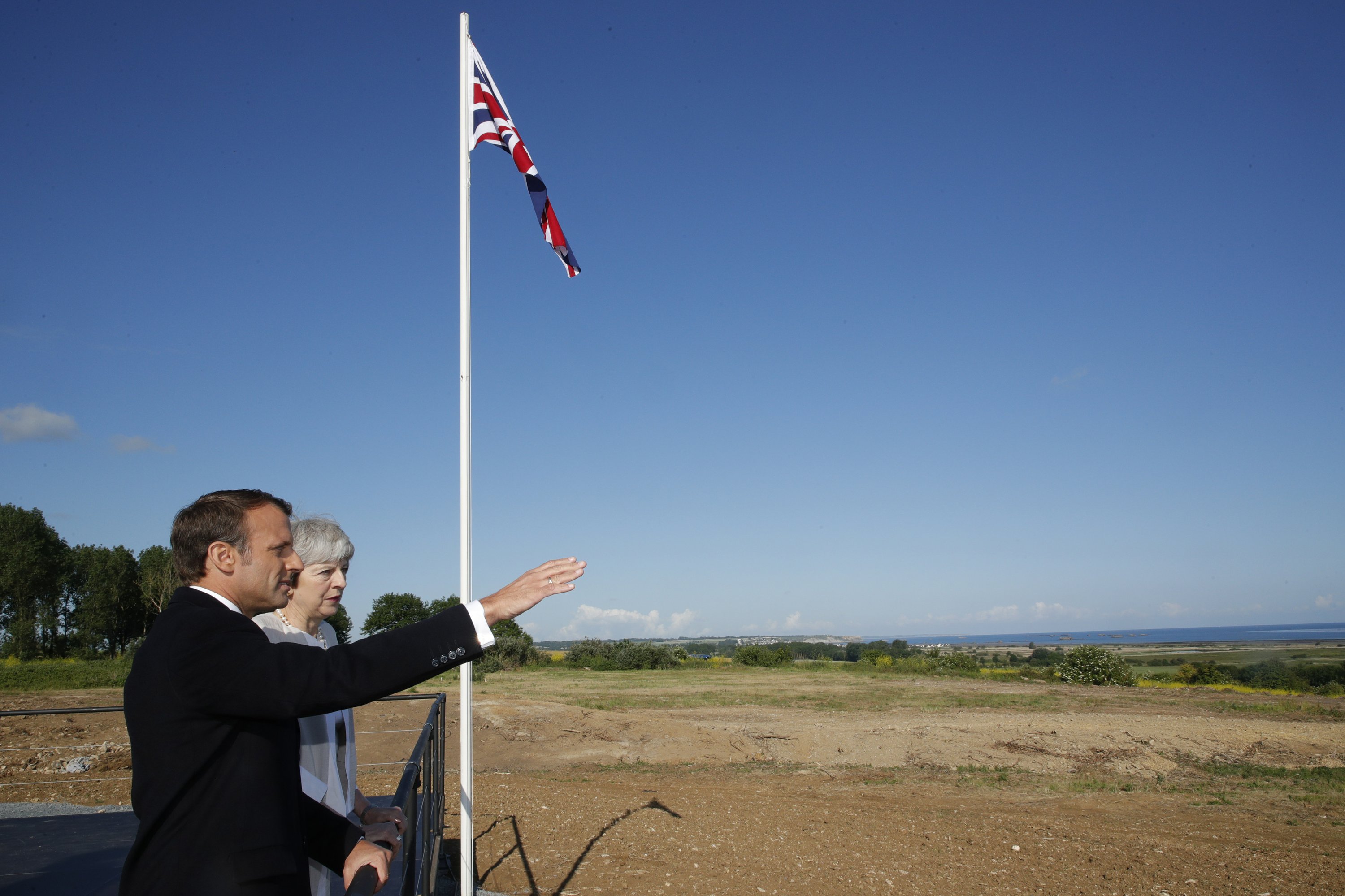 OMAHA BEACH, France — The Latest on the 75th anniversary of D-Day (all times local):

Marking 75 years since the epochal invasion of Normandy, Macron told a gathering of veterans and families of those fallen: “On behalf of my nation I just want to say thank you.”

He said the words in English, and World War II veterans gathered with him at the Normandy American Cemetery stood in applause.

Macron also praised the ambition and bravery of the United States, saying “your country is never so great as when it fights for universal values.”

Thousands of people and a handful of surviving U.S. D-Day veterans are gathering at the Normandy American Cemetery to honor thousands fallen in the pivotal invasion 75 years ago.

Veterans themselves took places on the stage where President Donald Trump and French President Emmanuel Macron are to speak, to the sound of wartime American songs and military music.

Veterans’ families, including children, settled in the front rows, while other guests clustered amid the vast expanse of rows of white crosses stretching through carefully trimmed lawns on a bluff overlooking Omaha Beach, the plunging view on the Atlantic a reminder of the sacrifices of American soldiers.

About 12,000 people were expected at the ceremony. Macron will award five U.S. veterans the Legion of honor, France’s highest distinction.

Britain’s Prince Charles, his wife Camilla and Prime Minister Theresa May are attending a service of remembrance in Bayeux, the first Normandy town liberated by Allied troops after D-Day.

Veterans and their families have filled the medieval cathedral for the service, which involved British and French clergy, the band of the RAF Regiment and the choir of Hereford Cathedral in England.

Cardinal Marc Ouellet read a message from Pope Francis, saying D-Day was “decisive in the fight against Nazi barbarism” and paying tribute to those who “gave their lives for freedom and peace.”

World leaders including French President Emmanuel Macron and U.S. President Donald Trump are taking part in events across Normandy to mark 75 years since the Allied invasion of Nazi-occupied France began on June 6, 1944.

The president of France and prime minister of Britain are saying “thank you” to D-Day veterans and those who died in the landmark invasion exactly 75 years ago.

Uniformed veterans in their 90s looked on as British Prime Minister Theresa May and French President Emmanuel Macron spoke Thursday at a ceremony at Ver-Sur-Mer laying the cornerstone of a new memorial that will record the names of thousands of troops under British command who died on D-Day and the ensuing Battle of Normandy.

May said, “If one day can be said to have determined the fate of generations to come, in France, in Britain, in Europe and the world, that day was the 6th of June, 1944.”

To the veterans, she said “the only words we can – thank you.”

Macron thanked the veterans and “all those who were killed so that France could become free again.”

The event was among several being held throughout Thursday marking the 75th anniversary of the Allied invasion that helped turn the tide of World War II against the Nazis.

Many people commemorating D-Day’s 75th anniversary worry that the sacrifices of the pivotal World War II invasion are being forgotten.

And that’s why they gathered at dawn Thursday all along Normandy’s landing beaches, holding flags, staring into the waves or thinking of the first waves of soldiers falling in the hail of German fire on June 6, 1944.

Richard Clapp, a 44-year-old former U.S. paratrooper and computer store owner from Julian, North Carolina, says: “If you forget history, it is doomed to repeat itself.”

Mike Connor, a 43-year-old Ford truck maker from Louisville, Kentucky, carried a black-and-white photo in his shoulder pocket of his great-uncle, John Connor, who fought in the Battle of the Bulge.

Arnold Omitt, a 52-year-old of Mesa, Arizona, described “a sense of appreciation for a whole generation of people who came here and liberated the continent from Nazi tyranny.”

D-Day veterans and other people are marking exactly 75 years since the invasion of Normandy that helped change the course of World War II.

The sea of mercury blue couldn’t have been more peaceful as the sun rose Thursday over Omaha Beach. About 100 people gathered at dawn on the edge of the waters that ran red here on June 6, 1944, the first of five code-named beaches where Allied forces came ashore to push the Nazis out of France.

Norwegian Sigrid Flaata drove from Oslo in a 1942 restored jeep to honor the soldiers who died on D-Day. Belgian Filip Van Hecke called his journey a “small effort to pay homage.”