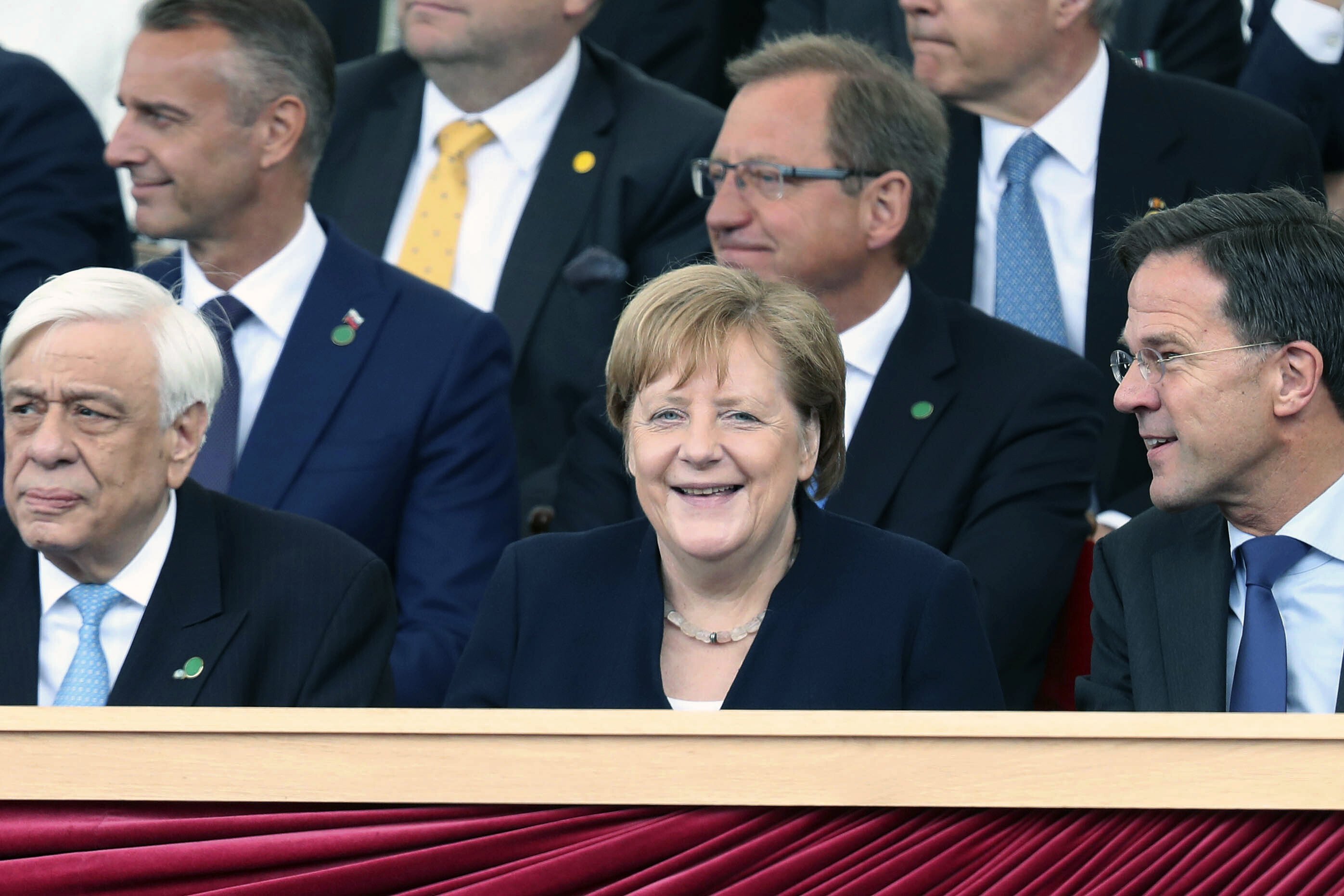 BERLIN — When Chancellor Angela Merkel thanked the Allies for the D-Day invasion and the “liberation” of Germany in World War II, she might have raised some eyebrows internationally. To those at home, the statement was unremarkable.

There’s no denying that the machine guns and howitzers firing at the Allied forces landing in Normandy 75 years ago were manned by German soldiers. But over the decades, Germans’ attitudes toward the war have evolved from a sense of defeat to something far more complex.

While the leaders of France, Britain, the United States and Canada went to England to commemorate the troops’ sacrifice and duty on Wednesday, Merkel listened quietly. After the ceremony was over, she told reporters that she considered her invitation “a gift of history.”

When those other leaders went to Normandy for ceremonies on D-Day itself on Thursday, Merkel was back in Berlin, holding a regular meeting with governors and discussing bilateral relations with the prime minister of Kosovo.

As the generation that elected Adolf Hitler and fought his genocidal war dies away, most Germans today see World War II through the prism of guilt, responsibility and atonement. And almost all agree that the defeat of the Nazis was a good thing.

That hasn’t always been the case.

Many Germans who survived World War II had supported Hitler and the Nazi race ideology that led to the murder of 6 million Jews in Europe — and they were devastated by the downfall of the Third Reich.

“After 1945, Germans first referred to the end of World War II as ‘collapse,’” said Johannes Tuchel, director of the German Resistance Memorial Center.

Their children, however, were faced with rebuilding the country from the ground up from the total defeat of the Nazis, and they saw potential rather than defeat.

After the country was back on its economic feet, younger Germans started to question their elders, culminating in the “1968 movement” in which students confronted their parents with the atrocities committed during the Third Reich.

Out of that era has grown today’s complex attitude.

“It has been a process to the point today where it is seen as Germany’s liberation from the Nazis by the Allied forces,” Tuchel said.

German leaders have largely followed the changing attitudes — and in some cases led them.

In 1985, then-West German President Richard von Weizsaecker called the Nazi defeat Germany’s “day of liberation” in a speech marking the 40th anniversary of the war’s end. His words were supported by most Germans, and to this day it is often cited by politicians and taught in schools.

Merkel praised his speech when he died in 2015, calling it “a necessary, clear statement that was significant for our German self-image.”

Another key moment came in 2004, when then-Chancellor Gerhard Schroeder marked the 60th anniversary of Col. Claus von Stauffenberg’s failed attempt to kill Hitler with a briefcase bomb. Schroeder called von Stauffenberg a hero — erasing the Nazis’ “traitor” label that had lingered after the war.

Merkel, who at 64 is the first chancellor born after World War II, has taken the new German self-image even further.

On Tuesday in Portsmouth, the embarkation point for the Allied force that invaded Nazi-occupied France in 1944, Merkel called D-Day a “unique, unprecedented military operation that eventually brought us in Germany the liberation from National Socialism,” the Nazi political movement.

She noted that the war’s end brought Germany’s rebirth as a leading European democracy, saying it was D-Day that set in motion the “reconciliation and unification of Europe, but also the entire postwar order that has brought us more than 70 years of peace.”

Unlike the many grand monuments to the Soviet and western Allied troops who fought against the Nazis, German tributes to its troops are typically understated.

Fallen soldiers are commemorated in humble memorials on village squares across the country listing the names of the dead — often grouping the casualties of World Wars I and II.

In schools, the military history of World War II is rarely a focus of instruction, with lessons instead concentrating on Holocaust education and the Nazi dictatorship.

When there are tributes, they tend to be more for members of the German resistance who were executed by the Nazis — the students who distributed anti-Nazi flyers at Munich University; the Red Orchestra network bent on sabotaging the Nazis’ war machine; or those like von Stauffenberg who tried to assassinate Hitler.

And next year, Berlin has declared a holiday for May 8, marking the 75th anniversary of Nazi Germany’s unconditional surrender.

Of course, not all in Germany agree that the Nazis’ defeat was a moment of liberation. Alexander Gauland, leader of the far-right Alternative for Germany, recently played down the Nazi period as a “speck of bird poop” in Germany’s history. Bjoern Hoecke, another party leader, suggested it’s time for the country to stop atoning for its Nazi past.

But a vast majority — even among those who were born decades after the war — believe it’s essential for Germany to keep alive the memory of the country’s inglorious past.

“In school and at home I learned that the Allies — especially the Americans — liberated us,” said Laetitia Zinecker, an 18-year-old business student at Berlin’s Free University. “Our history shapes who we are still today. It’s important that schools continue to teach about the past so that it will not be forgotten.”

On Thursday, some German newspapers ran photographs of the ceremonies in Portsmouth, or black-and-white images from 1944 of U.S. soldiers reaching the shores of France.

The top-selling Bild published a front-page picture of U.S. President Donald Trump, Queen Elizabeth II, Merkel and others looking upward, with an inset picture of a D-Day veteran recreating his Normandy parachute jump with an American flag in tow.

Its headline? “The world celebrates its liberators.”