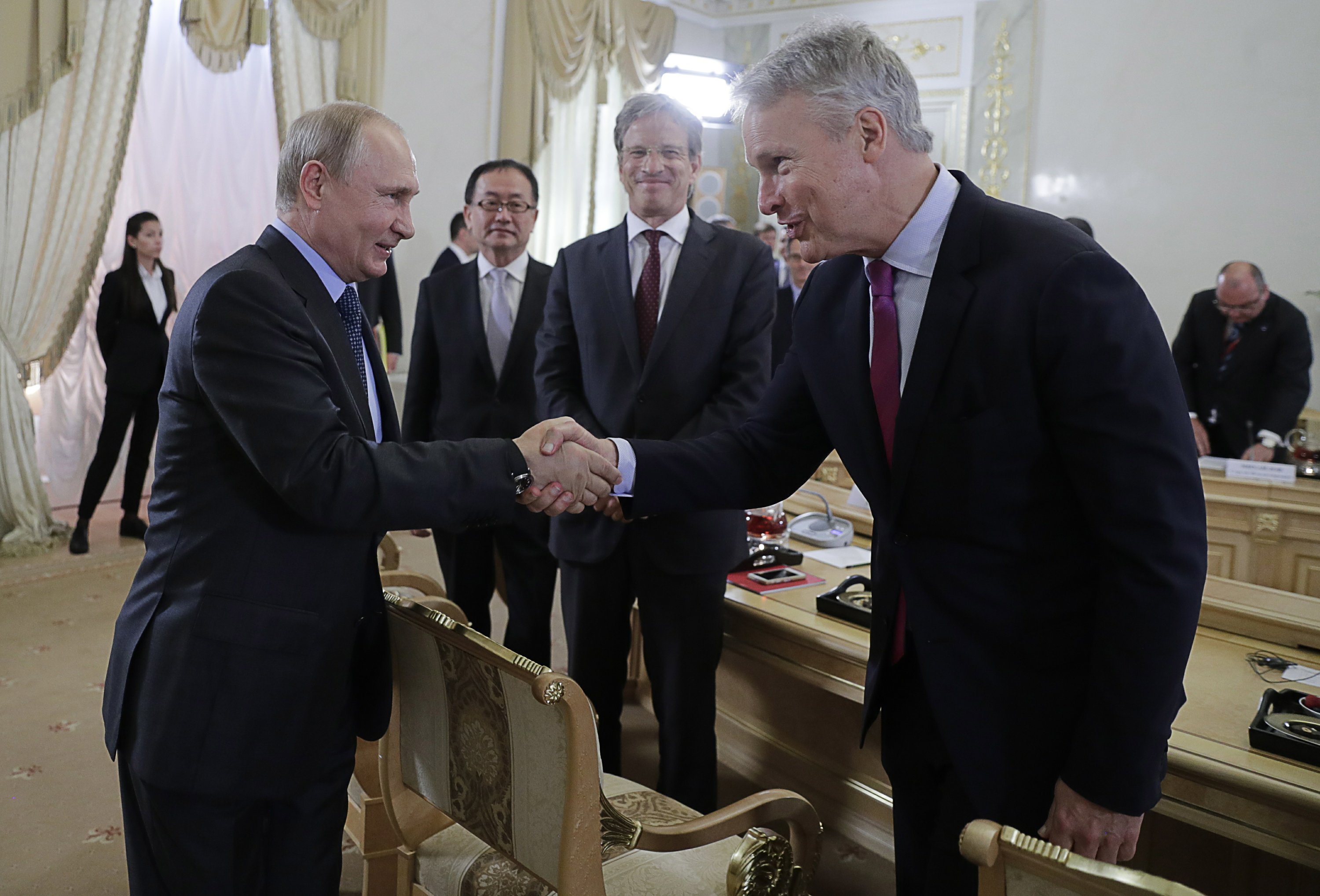 ST. PETERSBURG, Russia — Russian President Vladimir Putin on Thursday reaffirmed his staunch denial that his government meddled in the 2016 U.S. presidential election, adding that Moscow has no intention of interfering in any future votes, either.

Speaking in response to a question from The Associated Press during a meeting with chief executives of international news agencies in St. Petersburg, the Russian leader said that “we didn’t meddle, we aren’t meddling and we will not meddle in any elections.”

Putin and other Russian officials have hotly denied any interference with the U.S. vote to help Donald Trump win presidency, even though U.S. special counsel Robert Mueller has uncovered evidence of a Kremlin operation to interfere with the 2016 vote. He charged 12 Russian military intelligence officers with breaking into Democratic Party emails, and also indicted other Russians who used phony social media accounts to spread divisive rhetoric and to undermine the U.S. political system.

Putin insisted that “we don’t have and never had any plans to interfere in U.S. domestic politics,” but added that the Russian government can’t stop private citizens from expressing their views about developments in the U.S. online.

“How can we ban them from doing that?” he said. “Do you have such a ban with regard to Russia?”

The president added that President Barack Obama’s administration had ignored a Russian offer to agree on a set of rules regarding modern communications.

During his meeting, Putin also warned that the U.S. reluctance to start talks on extending a key arms control pact raises the threat of an uncontrollable arms race, but emphasized that Moscow has no plans to send troops to shore up Venezuela’s embattled leader

Asked about Trump’s tweet earlier this week that Moscow had informed Washington it had “removed most of their people from Venezuela,” Putin said that Russian experts come and go to service Russian-made weapons bought by Caracas.

“We aren’t building any military bases there, we aren’t sending troops there, we have never done that,” Putin said. “But we have fulfilled our contract obligations in the sphere of military-technical cooperation and we will keep doing that.”

Russia has staunchly backed Maduro, while the U.S. and several dozen other nations have thrown their support behind opposition leader Juan Guaidó and recognized him as interim president, asserting that Maduro’s re-election last year was illegitimate.

The Russian leader said he feels “absolutely neutral” about Guaidó, describing him as a “nice person,” but added that his leadership claim has created a precedent that could “lead to chaos across the world.”

“Let them elect U.S. presidents, British prime ministers and French presidents like that,” he said. “And where will all that lead? I would like to ask those who support it: Are you mad?”

Putin issued a stern warning about the danger of a new arms race.

He accused the United States of shunning talks on extending the New START nuclear arms reduction treaty that is set to expire in 2021.

Putin noted that while Russia has repeatedly signaled its intention to begin discussions on extending the pact, Washington has been unresponsive.

“We have said a hundred times already that we are ready, but no one is talking to us,” he said.

The New START that was signed in 2010 by Obama and Russian President Dmitry Medvedev limits each country to no more than 1,550 deployed nuclear warheads and 700 deployed missiles and bombers.

Putin added that Russia has surged ahead of others, developing an array of new nuclear weapons that will help ensure its security for “a long historic perspective,” but he voiced concern about the “complete dismantling of arms control mechanisms.”

Citing those alleged violations, the U.S. has formally suspended its obligations under the INF that bans all land-based cruise and ballistic missiles with a range of 500 to 5,500 kilometers (310 to 3,410 miles), setting the stage for the treaty to terminate later this year. Russia, which has denied any breaches, has followed suit.

While criticizing the U.S. moves, Putin said that his latest phone call with Trump “encouraged certain optimism.” He said that Trump shared his concern about the arms race and suggested that the money spent on new weapons would be better used for other purposes.

“As of now, the talks between us as the countries that have the most powerful nuclear arsenals are the most important, but I believe that all nuclear powers — both official and unofficial — should be brought in,” Putin said.