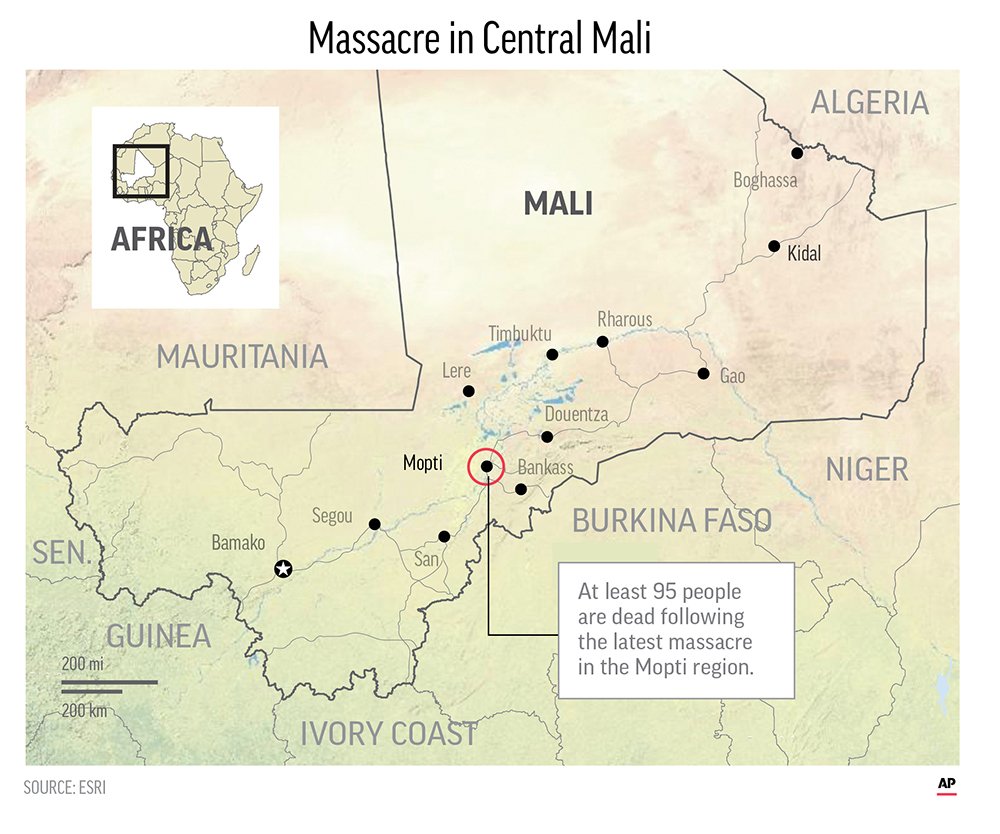 There was no immediate claim of responsibility for the attack, though tensions have been high since an ethnic Dogon militia was accused of carrying out a larger massacre in an ethnic Peuhl village in March.

Youssouf Toloba, who leads the Dogon militia known as Dan Na Ambassagou, has denied that his fighters carried out the March bloodshed that left at least 157 people dead. Some Peuhl leaders, however, have vowed to carry out reprisal attacks.

Amadou Sangho, spokesman for the Interior Security ministry, said another 19 people were missing after the Dogon village of Sobane was attacked around 3 a.m. on Monday. The village is in the commune of Sangha, the heart of the Dogon militia blamed for the March attack that has been the deadliest so far.

The latest attackers are suspected “terrorists,” Mali’s government said in a statement later Monday. “This carnage” also left homes burned and animals killed, the statement said. Security reinforcements were deployed to track the perpetrators, it said.

Intercommunal violence has risen steadily in central Mali over the last several years, exacerbated by the presence of Islamic extremists who have moved south from their strongholds in the arid north.

The Peuhl are accused of working alongside jihadists from the Islamic State of Greater Sahara organization to attack Dogon villages and prevent residents from cultivating their land.

The Peuhl in turn have alleged that the Dogons are collaborating with Mali’s military though there is no conclusive sign of state support.

Human Rights Watch has said the Dan Na Ambassagou militia has been implicated in scores of deadly attacks over the past year and Mali’s president has vowed to eliminate it.

Mali’s government must address the arming of ethnic self-defense groups and the proliferation of arms in central Mali or “there is a high risk of further escalation that could lead to the commission of atrocity crimes,” the United Nations secretary-general said in his latest report on Mali late last month.

The unrest in central Mali has displaced some 60,000 people, Secretary-General Antonio Guterres wrote, adding that he was “appalled” by the surge in violence and its effect on civilians.