When disaster hits, Indonesia’s Islamists are first to help 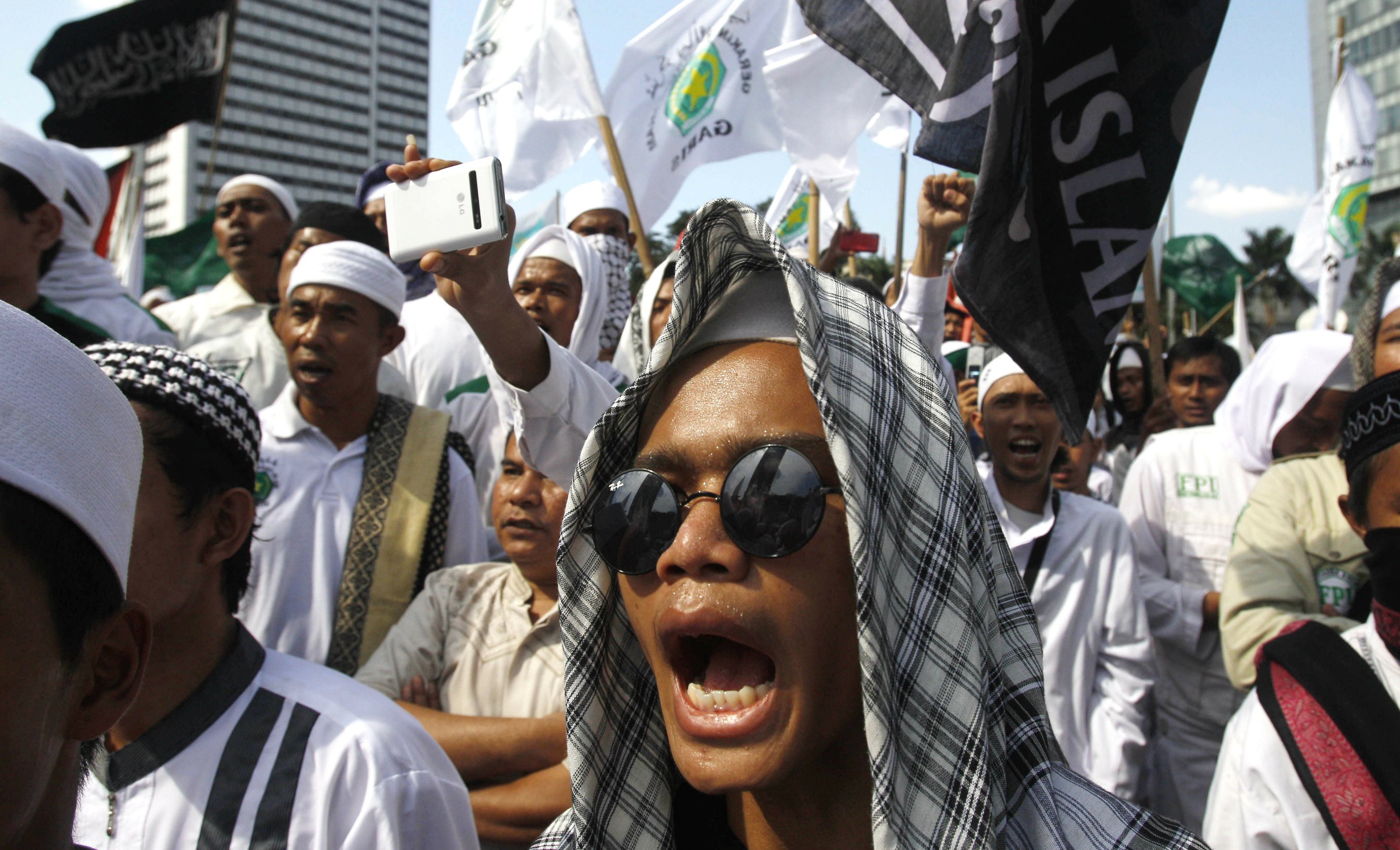 PALU, Indonesia — The flags hanging outside Anwar Ragaua’s house have drawn warnings from police, but the wiry 50-year-old vows he’s not taking them down.

After all, the police weren’t there to help when he was the sole fisherman in his village to survive the tsunami that inundated the Indonesian city of Palu at dusk on Sept. 28. Nor was the government. Nor were the aid organizations that swept into the stricken region in remote central Sulawesi.

Instead, the first people to offer him hope — and a new boat — were deployed by a hardline Islamic group notorious for vigilante violence such as storming the offices of Playboy magazine, smashing up stores selling alcohol and attacking minority Muslim sects.

When the wind picks up, it’s the Islamic Defenders Front’s white-and-green flag that flutters outside Ragaua’s house, alongside a much bigger black flag with white Arabic script. The words are a well-known declaration of Muslim faith; similar flags have become associated with violent extremists.

Since its inception two decades ago, the front has pushed for Islamic law to govern the lives of Indonesia’s 230 million Muslims, aiming to correct what it sees as the errors of Indonesia’s 1945 constitution that established a secular state and religious freedom. 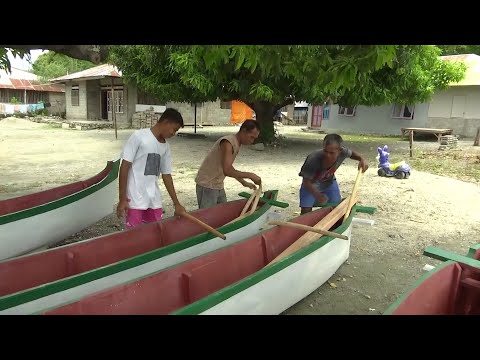 Though often dismissed as a fringe group, it has recently scored unexpected and stunning political victories — only partly due to the growth of orthodox Middle Eastern Islam in Indonesia.

The group’s success also can be traced to an effort over more than 10 years to repurpose its militia into a force that’s as adept at helping the poor and searching for victims buried under earthquake rubble as it is at inspiring fear.

The front was formed in Jakarta, researchers say, by elements of Indonesia’s military after the fall of dictator Suharto in 1998 as a tool for confronting pro-democracy activists and liberalism.

Able to act with impunity, it became infamous for running protection rackets and violent vigilantism. It now has chapters in 23 of Indonesia’s 34 provinces and a military-like command structure cascading down to village levels.

Maman Suryadi Abdurrahman, the head of the front’s Islamic Defender Troops militia, said the organization has a million members. Researchers have said its membership is much smaller, estimating that it numbers in the tens of thousands.

Walking a fine line, the front doesn’t propose that Indonesia become a caliphate, which would put it in direct confrontation with Indonesia’s civil law-based constitution. Rather it says it wants Islamic law to apply to the 9 out of 10 citizens who are Muslim. Senior figures display the red-and-white Indonesian flag on their uniforms and often ally with ultra-nationalistic causes.

“Our goal is to make Indonesia, in which Islam is the majority religion of the people, to be religious and clean from immorality,” said Abdurrahman. “We want an Islamist country, not an Islamic state, because a religious country will prevent the nation from suffering social injustice.”

The group says it has moderated its methods but it still aggressively takes on what it calls “community diseases” such as prostitution, homosexuality and celebration of Western holidays. It does so, it says, at the request of local communities.

“We’ve tried to improve our image,” Abdurrahman said. “We’ve changed the ways of our demonstrations to be more persuasive and peaceful.”

In so doing, it has followed the same path as other deeply conservative groups in Indonesia, including Hizbut Tahrir, which seeks a caliphate and was banned last year. All have embraced charitable work, filling a void left by the government and mainstream Muslim organizations.

Hamas (in Palestine) and Hezbollah (in Lebanon) have also emphasized social services as a way of winning hearts and minds.

The turning point for the Islamic Defenders Front was its response to the 2004 Indian Ocean tsunami, which killed more than 100,000 people in Indonesia’s Aceh, Abdurrahman said.

Even in Aceh, one of Indonesia’s most conservative provinces, they weren’t welcome, Abdurrahman said, but they persisted and won over Acehnese by setting up their command posts at mass graves and recovering and burying thousands of bodies.

The front, he said, “is now increasingly accepted by people.”

The front’s humanitarian arm — known as Red Crescent Indonesia, but not part of the International Federation of Red Cross and Red Crescent Societies — was very busy last year. Besides the Palu earthquake and tsunami that claimed more than 4,000 lives, earthquakes killed hundreds and destroyed thousands of homes on Lombok. A tsunami wreaked havoc on the Sunda Strait coastlines of Java and Sumatra.

The front was right there at each disaster, searching for victims, distributing aid and building temporary housing and new mosques. Its regular social services such as free health care have become a lifeline for urban poor.

Indonesia is a far-flung archipelago of 17,000 islands; its central government has often been accused of neglecting remote regions far from the center of political and economic power in Java.

In places such as Central Sulawesi, which has a history of sectarian violence, those failings have provided an opening for hard-liners and their message that religion, not government, is the answer.

While the 350 tons of aid the Islamic Defenders Front says it provided in Palu is a fraction of what eventually poured into the region, its delivery was rapid and grassroots.

As officials struggled to get a handle on what had happened, truckloads of rice and other aid had already been dispatched by the front’s chapter in Poso to the southeast of Palu.

The militia’s search-and-rescue team scoured two neighborhoods swallowed by the quake, recovering bodies before the government’s National Search and Rescue Agency turned up.

When the agency did arrive, grieving family members turned on them angrily, demanding to know why they hadn’t come sooner. Part of the reason: Official search efforts first focused on hotels.

“The eighth day was the worst; the rotten bodies were very smelly and the soil had begun to harden,” said Mahmud Khaemudin, secretary of the front’s chapter in Central Sulawesi.

The government’s response to images of the front at work was ham-handed — the Information Ministry called them a hoax. It was apparently unaware that the search-and-rescue agency has provided training to front members.

The front did not curtail its efforts in Palu after the catastrophe’s first days.

Anwar Ragaua was skeptical when, three months after the disaster, two men from the front arrived at his house and offered new fishing boats to him and two others.

“All this time I had often been offered similar assistance from various organizations, government and non-government, but they only made promises,” he said.

A day later, the men came back and ordered several boats from a boat maker, paying in cash.

“I almost cried,” Ragaua said. “I wanted to bow down in gratitude.”

Police have visited his house several times, suspicious he may be spreading radicalism, but Ragaua was unfazed. He flies the front’s flag, proudly.

The front’s rising political clout was evident in 2016-17, when it mobilized hundreds of thousands to protest the Christian governor of the capital, Jakarta. The governor, an ally of President Joko Widodo, was defeated and imprisoned for blasphemy.

In April’s presidential election, the front backed former general Prabowo Subianto. He overwhelmingly won in religiously conservative provinces. Widodo, however, was re-elected by winning over a coalition of moderate and minority voters.

There have been other setbacks. Front leader Rizieq Shihab fled to Saudi Arabia in 2017 to avoid arrest on what he said were fabricated pornography charges. An online petition calling for the government to deny legal status to the front has half a million signatures.

Interior Ministry spokesman Bahtiar, who uses a single name, described the front as involved in “dirty practices.” Under law, organizations involved in social or humanitarian work should not be a guise for political activities, he said.

“Indonesians are now smart,” he said. “There is no more room to hide in this era of openness.”