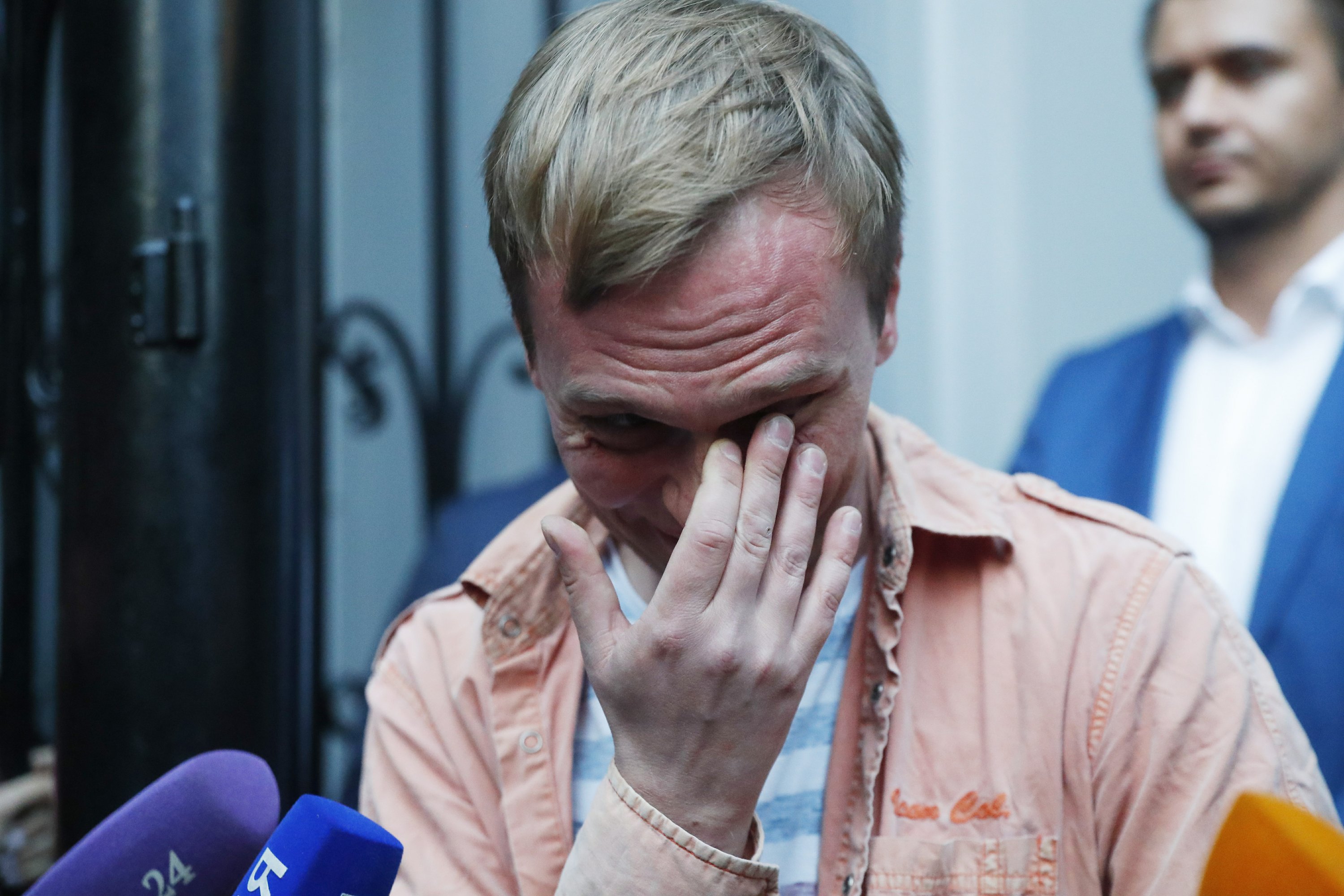 MOSCOW — In a stunning turnaround, Russian authorities Tuesday abruptly dropped all charges against a prominent investigative reporter after a public and media outcry over his arrest, and they promised to go after the police who allegedly tried to frame him as a drug dealer.

The release of Ivan Golunov marked an extremely rare case of security officials admitting a mistake. It also highlighted the difficulties that Russian journalists routinely face when reporting on sensitive topics like graft, corruption and President Vladimir Putin’s personal life.

The 36-year-old Golunov was stopped Thursday by police on a Moscow street and taken into custody, where his defense team said he was beaten and denied a lawyer for more than 12 hours. The journalist, who works for the independent website Meduza, had been facing drug charges that could put him in prison for up to 20 years.

Supporters mounted a nationwide campaign on his behalf, with journalists and others picketing Moscow police headquarters for five days. More than 20,000 people signed an online pledge to march in the capital on Wednesday, a public holiday, to protest Golunov’s arrest.

But Interior Minister Vladimir Kolokoltsev surprised the nation when he announced that all charges against Golunov were dropped after police found “no proof of his part in a crime.”

“I believe that the rights of any citizen, whatever his professional affiliation, ought to be protected,” the minister said, adding that he will ask Putin to dismiss two police generals, including the drug chief of the Moscow police, and suspend the officers who detained Golunov.

Speaking outside police headquarters, a shy and shocked-looking Golunov said he still couldn’t believe he was cleared so quickly.

“I will keep doing investigations to justify the trust of all those who supported me,” he said.

He added that he hopes the police will stop trying to frame innocent people, adding: “I hope it will not happen to anyone else in our country.”

In an unusual broadcast, his release was shown live on a state-controlled 24-hour news channel.

Judicial statistics indicate that the chances for criminal charges to be dropped or an acquittal once a person is in custody are extremely slim. When it does happen, authorities tend to avoid taking any blame.

“When the authorities admit their mistakes, admit the mistakes of the law enforcement officials and correct them, that’s very good because it shows that the government is reasonable,” Alexei Venediktov, editor-in-chief of the influential Ekho Moskvy radio station, told the Interfax news agency.

It is not yet clear if the police reversal represented a turning point for the many Russian journalists who are routinely attacked or face government pressure for their work. Many of them say they don’t feel safe to operate and report freely.

“We have put the pressure on the system and it worked this time,” said Pavel Kanygin, investigative reporter at Novaya Gazeta. “But it really is impossible to work in this environment.”

The circumstances of Golunov’s detention alarmed others in the media. In an apparent attempt to portray him as a professional drug dealer, police on Friday released several photos, reportedly from his home, of what appeared to be a drug lab. They later retracted the statement, saying that the photos were taken elsewhere.

In a separate statement later, the police said they found cocaine at Golunov’s home. A judge put him under house arrest Saturday following a public outcry of support, including from high-profile journalists working for state-owned media.

Many Russian journalists have to tread carefully in their work, especially when reporting about Putin and his family. But since Golunov’s work mostly focused on Moscow City Hall and the city’s crime-ridden funeral industry, the case raised questions about a possible shift in where the red lines are drawn in Russian journalism.

Award-winning journalist Roman Badanin was ousted from three major editorial positions between 2011 and 2016 after the media outlets under his leadership touched on topics believed to be too sensitive for the Kremlin.

Three top editors at the business newspaper RBC, including Badanin, were ousted in 2016 after reporting on Putin’s inner circle, including an investigative piece about an oyster farm near a mansion that a whistleblower has described as “Putin’s palace.”

To Badanin, the crackdown on Golunov stands out because it lower-level decision-makers, rather than the Kremlin or government-connected tycoons, were likely behind it.

“Ivan’s case tells us that now violence or unlawful actions against journalists can be applied at a lower level, not just by the Kremlin,” he told The Associated Press.

In act of journalistic solidarity not seen for at least 15 years, RBC and two other major papers, Kommersant and Vedomosti, published identical front pages on Monday with the headline “I am/We are Ivan Golunov,” and called for a transparent investigation of his case. The newspapers all had first-hand experience of government pressure and indirect censorship.

The solidarity surprisingly extended to tightly controlled state TV channels, with some commentators referring to Golunov as “a colleague” and questioning the police evidence.

Rights activists have long complained of police abusing their powers and planting drugs on innocent people. About 130,000, or nearly a third of the country’s prison population, were convicted on drug-related charges.

Golunov’s release prompted several prominent officials, including close Putin ally Alexei Kudrin, to call for a review of how drug charges are used and abused.

In a joint statement, the CEO and editor in chief of Meduza, along with Golunov’s lawyer and two other prominent journalists, pledged to investigate the police officials responsible for the arrest.

“The group of journalists we have gathered together in recent days will continue working, and now, they will be working together with Ivan himself,” the statement said. “This is only the beginning. We have a lot of hard work ahead of us if we are to ensure that what happened here will never happen again to anybody.”