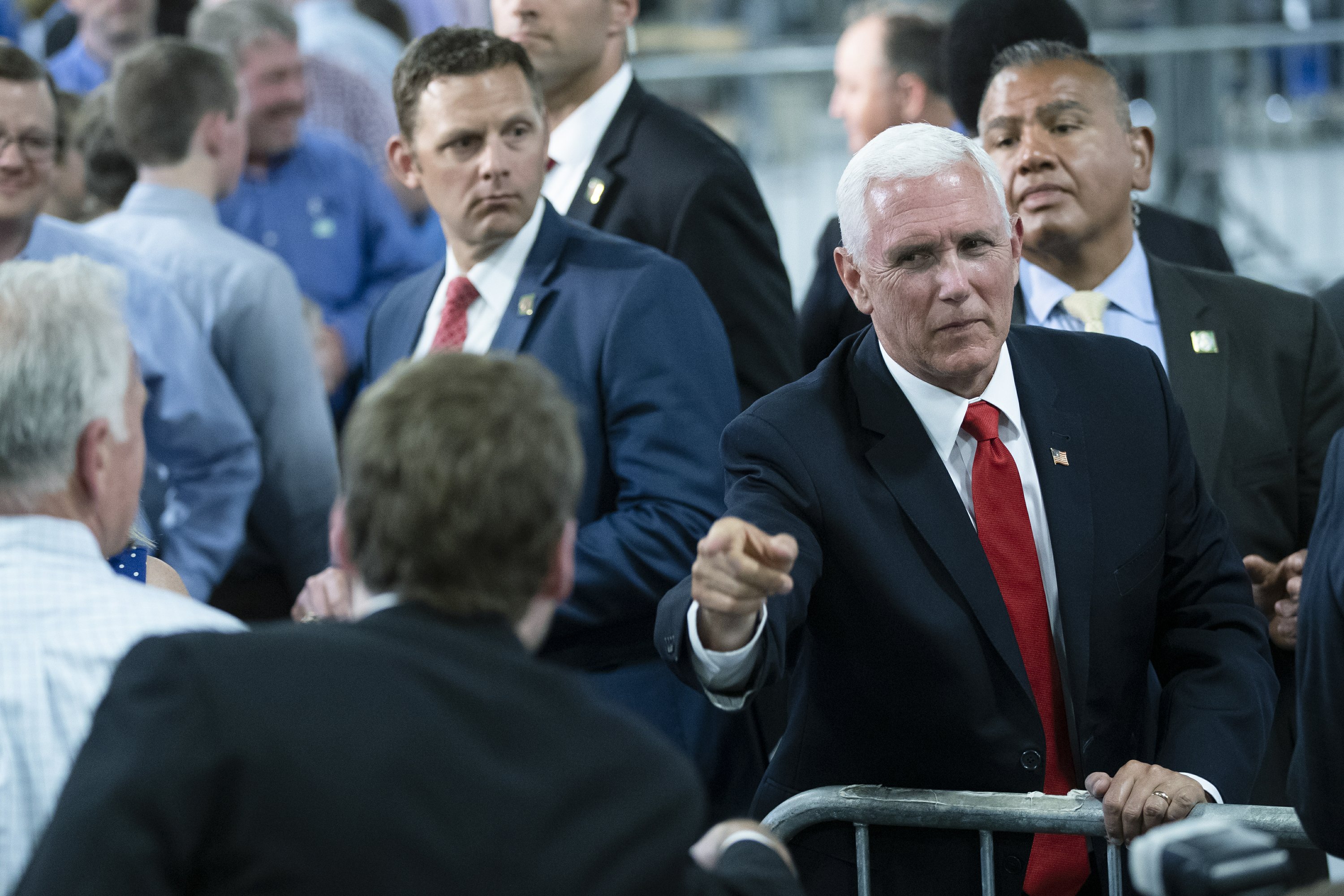 YORK, Pa. — A group of Pennsylvania manufacturers surrounded Mike Pence as he offered his standard greeting from President Donald Trump. The response was underwhelming.

“When I told him I was in the Keystone State, I think he sounded just a little bit jealous,” the vice president said to a few audible groans and tepid applause.

But when Pence turned to his assignment for the trip last week to York, Pennsylvania — selling the administration’s new trade deal with Mexico and Canada — the group warmed up. By the time he got to the part about calling on Congress to pass the U.S.-Mexico-Canada Agreement, his audience cheered him on.

Pence is on a quiet mission to advance the administration’s top legislative priority for the year — the troubled trade deal — and, with it, just maybe hold together the fraying Republican coalition ahead of the next one. As Trump wagers on a trade war with China and threats of another with Mexico, Pence has been traveling the country trying to build support for a free-trade deal. While his boss promotes the power of tariffs, Pence has been in places like Eau Claire, Wisconsin, and Lebanon, Indiana, speaking about the benefits of lowering them.

The vice president isn’t just trying to boost support for the trade agreement, which the administration wants passed this summer. He’s also trying to hold together a Republican Party deeply divided over Trump’s trade wars. The president’s policies fly in the face of his party’s support for free markets. They have the potential to drive away country club, pro-business Republicans — long a bedrock of the GOP — and even the blue-collar workers who crossed traditional allegiances to elevate the pair to the White House in 2016.

The administration certainly has some ground to make up. AP VoteCast, a survey of voters from the 2018 midterms, found Americans broadly critical in their assessments of Trump on trade. According to the survey of more than 115,000 midterm voters nationwide, 45% approved of Trump on trade, while 53% disapproved.

And Trump, who took over the GOP by storm, continues to be viewed skeptically by many party stalwarts. His now-delayed threat to place escalating 5% tariffs on Mexican imports spawned a war of words with the traditionally Republican U.S. Chamber of Commerce.

“They take advantage of us in every way possible, and the U.S. Chamber is right there with them,” Trump said Monday in an unscheduled interview with CNBC, comparing the business group to exploitive trade partners.

While Trump has tried to sell the USMCA as a replacement for the 25-year-old North America Free Trade Agreement he railed about as a presidential candidate, the trilateral trade deal is simply a modernized version of the pact, with long-sought updates for the new digital economy and some labor protections.

The manufacturing and agricultural areas most affected by NAFTA and its would-be successor are among the most politically significant of 2020, and it’s no secret that’s what’s guiding Pence’s travel schedule. It’s places like R&J Johnson Farms near Glyndon, Minnesota, located in a Hillary Clinton-won state that Trump’s team hopes to flip next year, where Pence visited last month to encourage Democratic Rep. Collin Peterson to bring Democrats on board behind the USMCA. It’s places like York, Pennsylvania, where Pence toured JLS Automation and its robotic packaging machines for items like fast-food egg patties and parmesan cheese crisps. York County voted for Trump by a nearly 2-to-1 margin in 2016, but the GOP’s performance suffered in last year’s midterms.

“It just happens to be they are going to be Democrat-held seats, but also in states that we need to win in 2020,” said Pence’s chief of staff, Marc Short.

As a former congressman, Pence is a known quantity among GOP lawmakers and interest groups, and Trump has often proved unwilling or unable to maintain the discipline of a strategic messaging campaign.

While Trump’s slate of protectionist measures has alienated many in the business community — most prominently the Chamber of Commerce — USMCA has proved to be a unifying priority for those essential elements of the Republican base.

“While we disagree on tariffs, that doesn’t change our really strong working relationship on things as important as USMCA,” said Neil Bradley, the group’s chief policy officer. He praised Pence’s salesmanship: “As a former member (of Congress) he understands the power of a vice president going into a district and talking about the benefits of a particular policy and how to move votes.”

Meanwhile, Democrats, who have many of the same gripes about NAFTA that Trump has espoused, are clamoring for ways to regain lost ground with working-class voters who found Trump’s rhetoric appealing.

It’s Pence’s job to stop the bleeding, holding events in front of posters with the slogan “We make it here, help us sell it there.”

For an unconventional administration, Pence’s dozen trips over the previous three months have largely stuck to a familiar playbook of political organizing. Roundtable visits with business leaders, hard-hat tours and speeches to workers are combined with local news interviews and calls to action, all to get Congress to take up the deal.

That timetable strikes many in the president’s party, and even some in the White House, as particularly rosy. The Trump administration started the clock on Congress to act in late May, allowing them to bring the legislation to lawmakers as soon as the end of June.

The White House hopes the accelerated timetable could keep the USMCA from becoming a political pawn as Washington quickly becomes singularly focused on the 2020 campaign, and the Pence effort is meant to push Democratic lawmakers to pressure House Speaker Nancy Pelosi to bring the trade pact to the House floor. But the White House acknowledges that Democrats may be unwilling to give Trump such a high-profile victory with his reelection bid just around the corner.