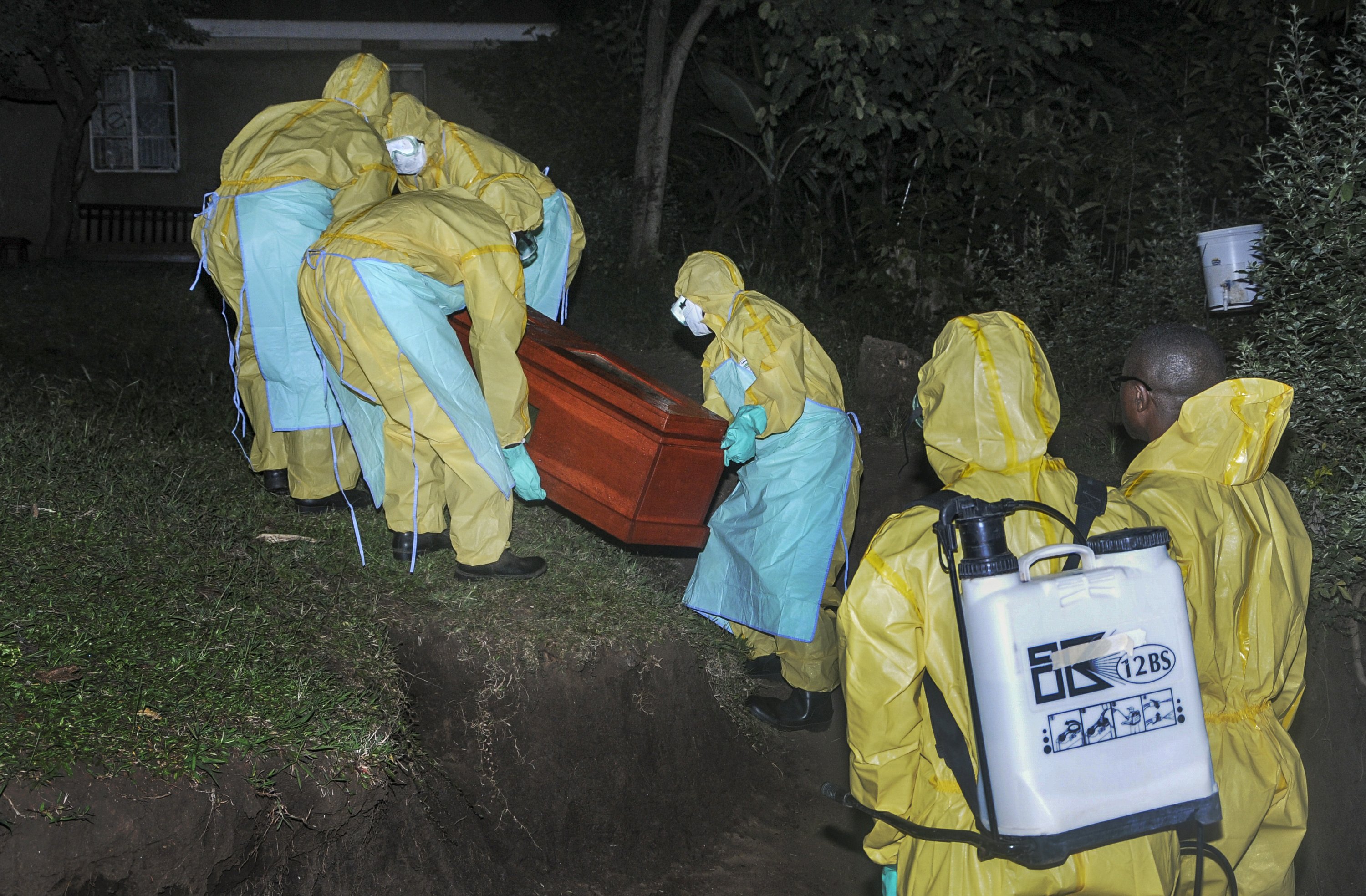 KARAMBI, Uganda — At last, the van with the Ebola victim’s coffin arrived. The woman’s relatives were relieved. But a small group of young people hissed in anger.

They watched the burial team carefully put on protective suits, itching for a fight. They grabbed the rope meant to lower the coffin into the grave and used it as a barrier, blocking the van’s path. One brandished a stick.

“You will not leave this place if you do not bury the coffin and fill the whole place with soil,” he said, wary of contamination.

The second-deadliest Ebola virus outbreak in history has spread this week from eastern Congo into Uganda , and the confrontation as one of the first victims was buried late Thursday was a flash of the community resistance health teams have faced for months over the nearby border.

More than 1,400 people have died since this outbreak was declared in August, and the response has been hampered by misinformation and fear in a region that had never faced Ebola before. Ugandan health workers had long prepared to mount a full-blown response if the virus got past the screening conducted at border posts. Earlier this week, it did.

A family exposed to Ebola while visiting Congo returned home on an unguarded footpath. Some already were showing symptoms. By the time Ugandan authorities who had been alerted by Congolese colleagues found them, a 5-year-old boy was vomiting blood. He was the first to die.

His 50-year-old grandmother, identified by a relative as Agnes Mbambu, was next. Already bleeding, she went straight to a local hospital upon returning to Uganda, relatives and health officials said. On Thursday morning, Ugandan officials confirmed her death.

Burying her took all day and into the night as health workers pulled together the means to do it safely. Ebola can spread quickly via close contact with bodily fluids of those infected. The need for safe burials conflicts with traditional customs of having loved ones wash and dress the corpse. In Congo, that has led to trouble.

In Karambi village on Thursday, however, the tensions came from waiting.

Somber men sat on wooden chairs in a relative’s compound. Five women, professional mourners, rested in the grass. But as dusk arrived there was no sign of the burial team, even though Ugandan authorities hours earlier issued a statement saying the woman was already buried. The idea of a nighttime funeral felt disgraceful.

“This is not right,” said the victim’s brother, Gaspari Kinyama, surveying the burial site among some coffee trees. “At least she is going to be buried here among her people. She has that right.”

At 7:30 p.m. the funeral procession arrived. Tensions grew as the burial team changed into protective suits in the glow of car lights. When the team’s leader didn’t commit to covering the coffin with soil to the young men’s satisfaction — it was not clear why — the confrontation almost ended in violence.

Ugandan authorities are now trying to keep Ebola from spreading by tracking everyone who had contact with the infected family. At least 27 such people have been identified, the health ministry said.

Community participation is key, and the coming days will test Uganda’s ability to contain the virus in an area that is a hotbed of anti-government sentiment. Kasese, the town nearest the outbreak, has been tense since the central government jailed a popular traditional leader in late 2016, accusing him of trying to form a breakaway republic.

Days ago, the leader’s mother died. Her funeral is expected this weekend. Now the government says it is restricting public gatherings in order to contain Ebola, which could lead to anger among those who wanted to meet and mourn.

Although Uganda has faced multiple Ebola outbreaks in the past, this is the first time this mountainous area has experienced the virus. That’s echoed across the border in eastern Congo, where some wary residents have attacked or fled from health workers.

Some people here are suspicious as well.

The burial of Mbambu, Uganda’s second Ebola victim, originally was meant to take place some 20 kilometers (12 miles) away, near her father’s grave. But the local community rejected her, said Rhoda Katsumbiro, a resident of the village where her coffin now rests.

“The family members there, they thought they would be affected,” Katsumbiro said. “They feared. We had to bring her here.”