PARIS — Egan Bernal is just 22 years old. Two years younger than Eddy Merckx was when the Belgian great won his first Tour de France half a century ago.

Gifted with superb bike handling and climbing skills, Bernal has matured by leaps and bounds to become cycling’s most exciting Grand Tour rider, and one of the top contenders at cycling’s marquee three-week race, which starts this weekend from Belgium.

Even Merckx, who has seen myriads of riders trying to emulate his feat over the years, has been impressed. In March, the five-time winner tipped Bernal as a future Tour champion after the Colombian phenomenon won the prestigious Paris-Nice one-week race at a younger age than he did.

Bernal’s time to deliver on the biggest stage was not supposed to come so early, though.

After competing at his first Tour last summer and doing an impressive job in support of teammates Geraint Thomas and Chris Froome, Bernal was set to get a maiden leader experience at a three-week race at the Giro d’Italia this Spring. But a training crash left him with a collarbone fracture that ruled him out of the race and left him on the sidelines for 76 days.

Bernal returned to competition with a bang, winning the Tour de Suisse at the end of June.

For all his prowess, he was set to keep a low profile this summer and to ride in support of Froome. But the British star rider suffered a horrific crash at the Criterium du Dauphine that ended both his hopes of winning a record-equaling fifth Tour title, and season. 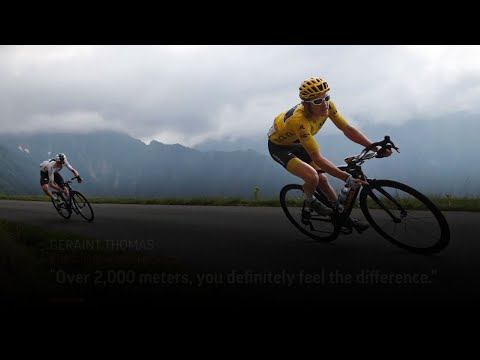 VIDEO: How the mountains could decide this year’s Tour

With Froome out of the picture, the leadership at Ineos — the former Sky team —logically fell to Thomas, the defending Tour champion. But Thomas’ preparations for the Tour have been far from ideal. He has not won a race this season and, even worse, abandoned the Tour de Suisse this month after crashing before the race hit the mountains, meaning he did not test his legs at high altitude in racing conditions.

Bernal keeps saying he will race in support of Thomas but, as was shown last year when Froome accepted to work for Thomas, hierarchy within the Ineos squad is defined by performances on the road.

“I don’t choose to say that I’m the favorite,” Bernal said after his victory in Switzerland. “In any case, I will go with G (Thomas), he will be our leader. I will try to help him. If he’s better than me, for sure I will help him. I don’t have any problems to help him. I’m just 22 years old, so I think that I have a lot of Tours in front of me.”

With Bernal touted as cycling’s future star, it is fitting that the Tour starts in Brussels to mark the 50th anniversary of the first of Merckx’s five Tour victories.

The route features five summit finishes, including three stages finishing above 2,000 meters, and only 54 kilometers of time trialing. That perfectly suits Bernal’s qualities. A natural-born climber, he has developed into an all-rounder capable of limiting time losses to minimum damage in the race against the clock.

The 3,480-kilometer (2,145-mile) race begins with a flat stage for sprinters around the city of Brussels and stays there the next day for a 27-kilometer (17-mile) team time trial. After leaving Belgium, the Tour snakes through the Champagne and Lorraine regions before a first mountain test at the Planche des Belles Filles, in Alsace.

This year’s best bits include Stage 14 on July 20 that features a climb up the Tourmalet pass — one of the most famed in Tour history — and three days of Alpine climbing on stages 18-20. There is an ascent up the leg-breaking Galibier and imposing Iseran — standing 2,770 meters (9,100 feet) — and a relentless 33.4-kilometer (20.7-mile) trek up to the ski resort of Val Thorens.

“This year we often go higher than 2,000 meters,” race director Christian Prudhomme told The Associated Press. “Because we are also celebrating the centenary of the yellow jersey. This jersey embodies excellency; it is pushing toward higher height.”

After years of Team Sky’s total dominance, the narrative of the race is likely to change. Ineos remains the strongest squad, with experienced riders including Wout Poels, Gianni Moscon and Michal Kwiatkowski, but Froome’s absence, coupled with the withdrawal of last year’s runner-up Tom Dumoulin, has reshuffled the game and produced a long list of top contenders.

Among them, two-time Dauphine winner Jakob Fuglsang has big expectations on the back of an already successful season. Runner-up at the Giro, Vincenzo Nibali chases a fifth Grand Tour win and Adam Yates will try to trade the white jersey of best young rider he won in 2016 with a yellow tunic. France has also good chances of getting its first homegrown Tour winner since 1985 with Romain Bardet or Thibaut Pinot. To sum it up, this Tour has the potential to produce fireworks, not only on Bastille Day.