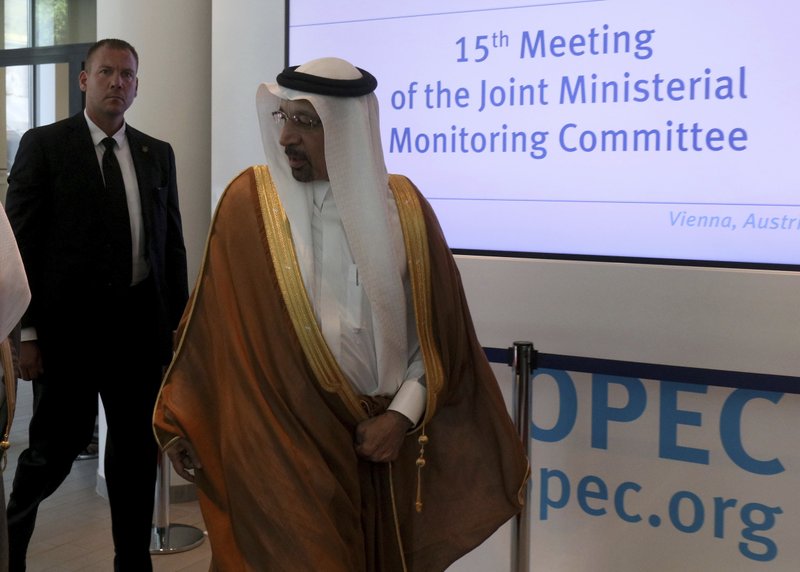 VIENNA — OPEC looked set to extend its current deal to cut production for nine months as the oil cartel faces a weakening outlook for demand because of waning global growth.

Member country representatives were meeting Monday at the Organization of the Petroleum Exporting Countries’ headquarters in Vienna and will hold talks with non-member producing states on Tuesday.

The decision is complicated by tensions between the non-OPEC country U.S. and Iran that have sent prices higher.

Several key representatives said group members were falling into line behind a nine-month as opposed to a six-month extension. Saudi Arabia’s Energy Minister Khalid Al-Falih said “we will not know for sure until tomorrow but that most countries “want nine months.”

The official rollover of the full deal is dependent on both OPEC and non-OPEC countries agreeing.

The current deal to support prices reduced production by 1.2 million barrels per day starting from Jan. 1 for six months. Most of the cuts came from OPEC nations, who agreed to cut 800,000 barrels per day, with the rest of the cuts coming from Russia and other countries. The cuts were aimed to put upward pressure on the price of oil and reduce oversupply.

Tensions between the U.S. and Iran and attacks on tankers near the Strait of Hormuz have pushed up oil prices in recent days. Over the longer term however, demand could weaken according to the International Energy Agency, which cut its demand estimate earlier this month.

On Monday oil prices rose after Russia and Saudi Arabia backed an extension of the cuts. Brent crude traded 2.9% higher at $66.60 per barrel.

Since December’s decision to cut production, conditions in the oil market have become increasingly complex, making a decision over an extension less clear.

“It’s a much harder market to forecast,” said Amy Myers Jaffe, senior fellow at the Council for Foreign Relations.

“I’m of a confused mind, and I think many participants are,” Jaffe said. “I think the outlook right now is very ripe for a supply shock.”

Geopolitical turmoil and production problems in various markets have led to concern that oil supply would be tight, conditions which tends to push the price of oil higher. Tensions have been rising in the Middle East as the U.S imposed new sanctions on Iran, and oil tankers have been attacked near the Strait of Hormuz, a narrow passage through which a fifth of all oil traded around the world passes. And production out of Venezuela, once one of the world’s largest producers, has collapsed.

Experts say a military conflict between the U.S. and Iran would further constrain oil supply and send oil prices higher.

In addition to the supply concerns, there are worries over demand not least because of the slowdown in the global economy partly as a result of trade tensions between the U.S. and China. That raises the prospect of lower oil demand and consequently lower prices.

To some degree, those opposing forces have counter-balanced each other, but the dueling dynamics make it difficult to predict what’s likely to happen with the price of oil, and that may make decisions for OPEC leaders challenging.

Jaffe expects the price of oil to continue rising for the next few months.

“I disagree with people on the thesis that the geopolitical risk and the razor-thin supply doesn’t matter because the economy is slow, because it just hasn’t slowed down that much,” Jaffe said.